How to cite this article:

Sandia National Laboratories materials chemist Dale Huber has worked to make nanoparticles the exact same size for 15 years. His long-term collaborators at Imagion Biosystems will use these magnetic nanoparticles for their first breast cancer clinical trial later this year.

He is holding a microfluidic chip that can make tiny amounts of nanoparticles. The round-bottom flask beside him can be used for making much larger quantities of nanoparticles. Photo by Randy Montoya Click on the thumbnail for a high-resolution image.

Now, he and his long-term collaborators at Imagion Biosystems will use these magnetic nanoparticles for their first breast cancer clinical trial later this year.

The nanoparticles stick to breast cancer cells, allowing the detection and removal of even small metastases. Imagion Biosystems and Huber have been working together synthesizing nanoparticles since the opening of the Center for Integrated Nanotechnologies in The initial work we did with CINT to develop a method to give precise control Synthesis of magnetite nanoparticles the size of the nanoparticle was key for our MagSense magnetic relaxometry technology for the detection of cancer.

CINT provides free access to state-of-the-art equipment and world-leading scientists for nanoscience researchers in academia and industry, provided they publish the results in scientific journals. The magnetic nanoparticles are coated with cancer antibodies, which stick specifically to cancerous cells.

A tiny magnetic pulse — about the strength of a refrigerator magnet and hundreds of times weaker than one produced by an MRI machine — can sense the difference between nanoparticles stuck to cancer cells and those that are floating freely, allowing the detection of very small metastases.

Instead, Vreeland and Huber developed a method where they slowly add the ingredients to a molten metal bath whose temperature varies less than half a degree. This produces nanoparticles with less than 2 percent size variation.

Food and Drug Administration and European Union regulations needed for use in patient clinical trials. Everything changes, even the boiling points, because the Netherlands is basically at sea level. 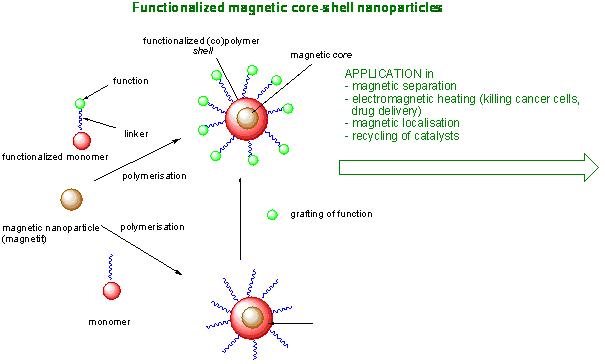 Before each patient has several lymph nodes removed surgically, the magnetic nanoparticles, coated in the breast cancer-specific antibodies, will be injected at the site of the known tumors.

Small angle X-ray scattering is a method to determine the size and size distribution of nanoscale materials. This almost real-time size measurement enabled Vreeland to predict how the reaction would end and validate that they were on the right path, she said. The team used other CINT instruments to characterize the magnetic strength and coatings of the nanoparticles.

In addition to accessing the CINT experts and equipment through its user program, the partnership with Imagion Biosystems was supported by several New Mexico Small Business Assistance Program grants, which can support proprietary research. The team has published several papers from the collaboration including one in Chemistry of Materials in Sandia Labs has major research and development responsibilities in nuclear deterrence, global security, defense, energy technologies and economic competitiveness, with main facilities in Albuquerque, New Mexico, and Livermore, California.

"Günter Schmid, the Editor of 'Nanoparticles', is successful in securing the participation of prominent leading experts; he also excels in integrating the chapters in such a way that there is no disjointedness between the different topics which is a .

The development of eco-friendly technologies in material synthesis is of considerable importance to expand their biological applications. Nowadays, a variety of inorganic nanoparticles with well-defined chemical composition, size, and morphology have been synthesized by using different microorganisms, and their applications in many cutting .

The magnetite nanoparticles were prepared via the chemical co-precipitation method by the following g of FeCl 2 ·4H 2 O and g of FeCl 3, with the molar ratio of ferric ion to ferrous ion in the solution of , were dissolved in ml of deionized water under a nitrogen gas flow with vigorous stirring at various temperatures (0–90 °C).